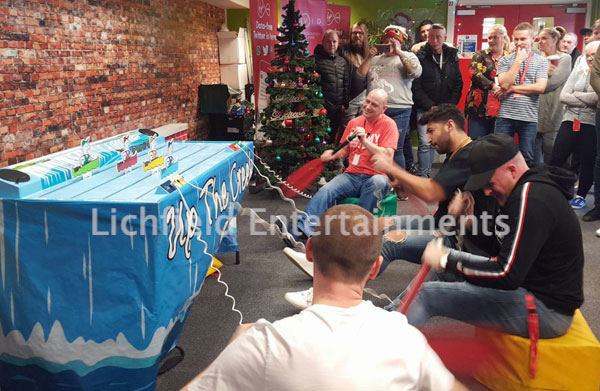 Ice breaker games hire. If you need to break the ice and get people mixing, mingling, and socialising at your event what better way than some easy going but fun ice breaking activities and games? We have a great selection of ice breaker games available for hire that are perfect for this purpose and the following have been selected as they don't require any particular skill and none should prove so embarrassing that your guests are reluctant to participate.

Some suggestions for Ice Breaker games for your event

Our interactive electronic Boat Racing is as far as we know the only one available for hire in the UK. Played by two to four people at a time the faster they paddle their oar the faster their colour co-ordinated boat moves along the river type track in front of them. First to the finish line wins. 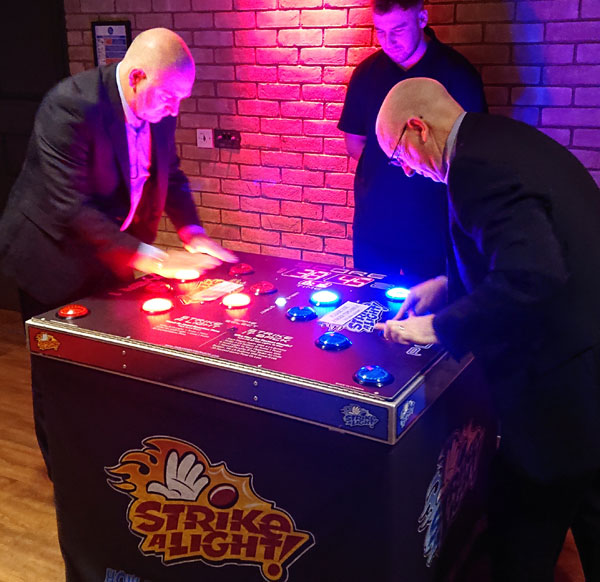 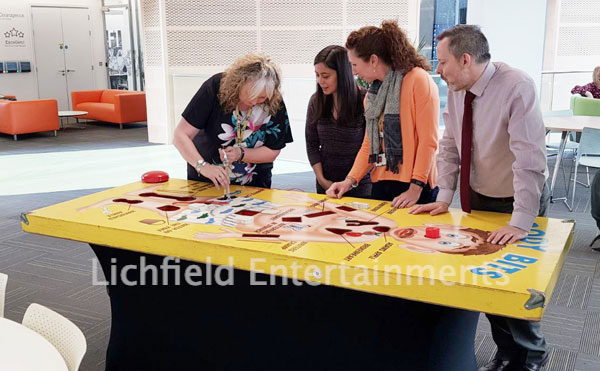 The giant Body Bits game is a massive 7ft version of the giant operation type game we all played as kids. Complete with buzzer and flashing red nose! This game is great for both casual use or organised competitions. Other interactive electronic games include Pixel Play that includes four different retro theme games, and the electromagnetic Pluck a Duck for one or two players. We have a Dance Mats Machine with a selection of songs ranging from the 80s to the recent that you can test your dance skills to, and a Retro Arcade Machine featuring a huge number of games from the 80s and early 90s. 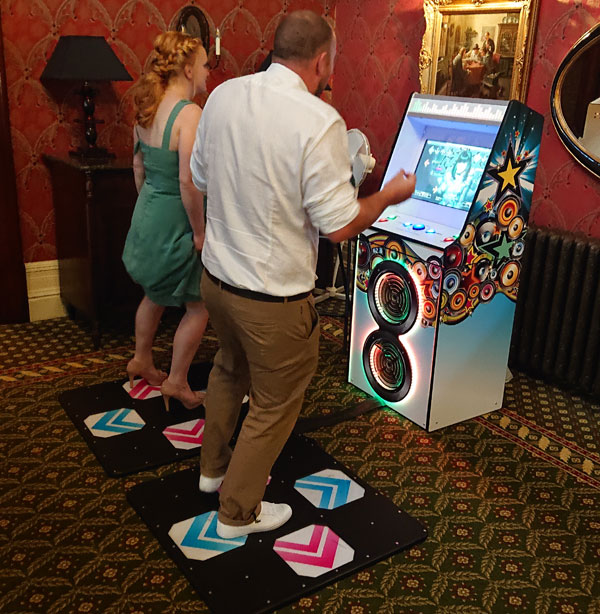 We have a range of Giant Games including Jenga, Connect 4, Quoits, Twister, Noughts and Crosses, Kerplunk, and Cornhole. 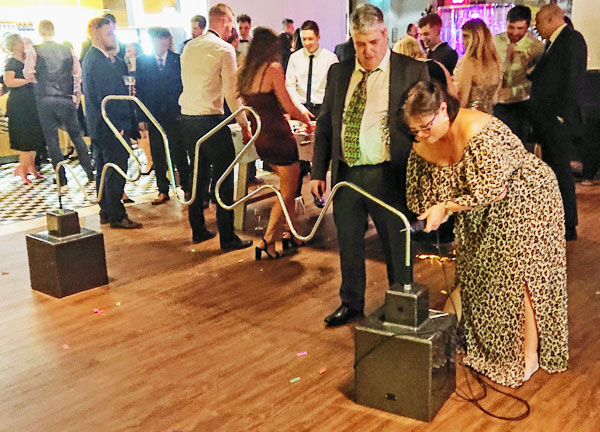 Giant Wonky Buzzer Wires are frustratingly addictive games that always attract a crowd of willing participants who are all sure they can do better than the previous player and we have three different variations of this game. We have our 'Standard' Giant Buzzer Wire which is a rechargeable table top game that takes up a space of approx 4ft wide. Next we have our 'Automated' version that again needs a width of approx 4ft. This one has an automatic time limit of 60 seconds to complete it and allows you three lives that are indicated by illuminated LED lights that go out one at a time as and when you touch the wire. It also has a heartbeat type soundtrack that speeds up as your time to complete the game runs out. Finally, we have our Mega 10ft Buzzer Wire and this ones a floor standing game that runs from a rechargeable power pack. 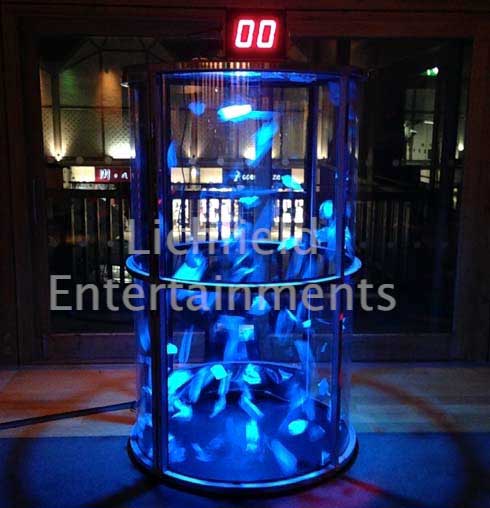 Our Grab a Grand will take you back to the TV days of Crinkly Bottom and the Crystal Maze where the participant has to collect as much of the circulating money as they can within the time period allowed. The 'money' can be play money, or promotional vouchers. It can also be run in what we call Ball-Nado mode using special coloured foams balls. 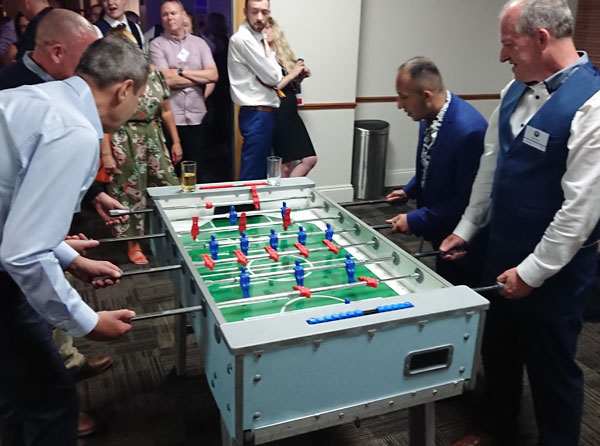 Fairground style games are a great ice breaker idea for corporate functions as they can be played by everyone irrespective of dress code and without the need to be an exhibitionist! In our fairground game range we have a traditional Coconut Shy, a more compact Inflatable Coconut Shy where you aim for target holes rather than real coconuts, other Side Stall games such as Hook a Duck, Ring the Bull, Play your Cards Right, Crossbow Shoot, Feed the Clown, and Splat the Rat. We also have a Test you Strength High Striker and a great range of Giant Wonky Buzzer Wires.

Our Crazy Golf is great ice breaker game that appeals to both golfers and non-golfers and is another game that can be played in either formal or non-formal dress code. It can be supplied as individual holes or as a complete six or nine hole course complete with scorecards and pencils. 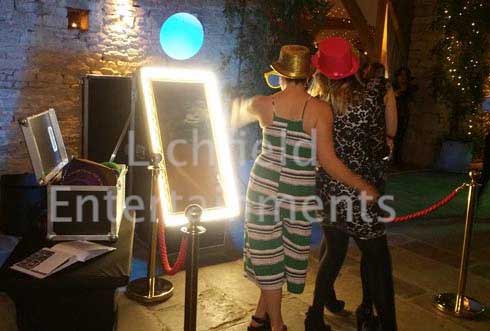 A Selfie Pod or Selfie Mirror are now the must have items for any evening event.

Our Footpool game is a combination of football and pool and can be played indoors or outside.

Bring the fun of the arcade to your event with an Air Hockey Table. A two player game that always proves popular. We also have a high quality Foosball table available. 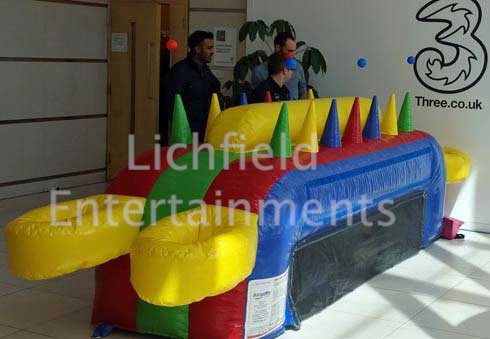 With our Air Juggler game two players on opposite sides race to move their hovering ball from cone to cone using the airflow. This game can be played in relay format if you'd like to use it as a team game.

Our Airstream Table Football is a giant blow football game for four to six players at a time so is a great game to break the ice. Players move the ball around the pitch using the flexible air jets. 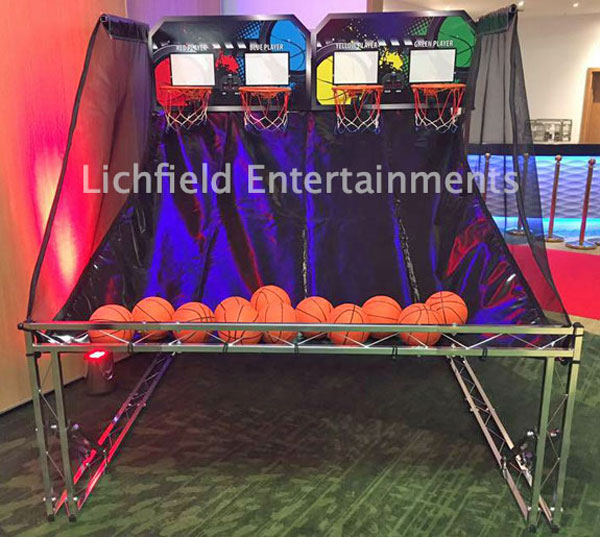 Basketball Challenge is a game where two or four players compete head to head to score as many baskets as possible in one minute. Scoring is shown on the LED display.

To discuss the ice breaker games we can supply to get people mixing and mingling at your event please get in touch via enquiries@lichfieldentertainments.com or call on 01283 792974.